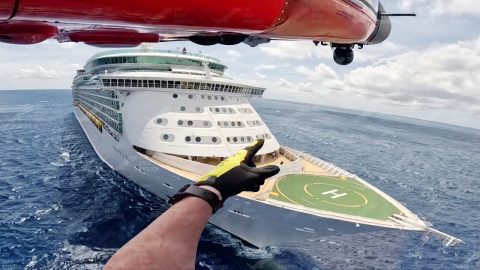 On average, the US Coast Guard conducts 109 search and rescue cases daily. With this amount of rescues, it’s safe to say that one of the USCG’s top priorities is to train its personnel for such circumstances.

As seen in the video, a Eurocopter MH-65 Dolphin and its crew are tasked to perform a rescue in the middle of the ocean as part of an exercise. The helicopter crew uses a rescue hoist, allowing the “Rescue Swimmer” to descend from the aircraft to reach the cruise ship.

After the target is reached, a litter is lowered from the MH-65 to the deck of the cruise ship. The injured person is then placed inside the rescue basket to ensure their safety as they are pulled into the cabin of the Dolphin. When finished, the rescue hoist is used once more to lift the rescuer aboard.