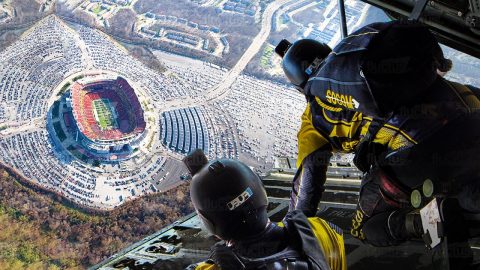 Parachute aerial demonstrations require intensive planning, coordination, and an experienced team to pull off. That’s why the US Navy Parachute Team only accepts members who have conducted real-world operations in their elite unit.

The Leap Frogs, as they are called, are made up of active-duty Navy SEALs, SWCCs, and support personnel.

Before every demonstration, the team first performs a “streamer pass” to help them gauge the wind speed and direction. If they were ready to go, they’d activate a smoke canister on one of their foot brackets, known as an “early burn”. The canisters also make it easier for them to see each other while gliding in the air.

Leap Frogs have been doing shows for decades, mainly performing in sporting events and airshows all over the country. With a packed schedule, it’s only a matter of time before we see them again landing inside a football stadium.