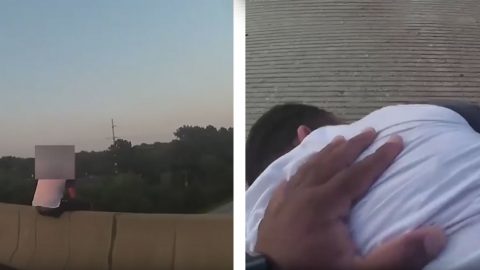 On August 14th, 2018, a phone call was made to the York-Poquoson Sheriff’s department about a man sitting on the outer edge of a local bridge. Within moments, an officer pulled up to the scene to assess the situation.

Once on the scene, Deputy James Robinson saw a man sitting on the barrier at the high point of the overpass. Sobbing, the man didn’t seem to respond to any of Robinson’s inquiries, but that didn’t stop the Deputy from calmly talking to him about the situation.

Robinson kept on talking to the man, inching closer and closer until he got another idea. He pretended there was a car behind the man attempting to jump, and told him he’s going to try and get it out of the way. This gave Robinson a chance to get behind the man and quickly put his arms around him, pulling him back to safety.

The end of this tense encounter is just heartbreaking. The man started crying uncontrollably, Robinson trying to comfort him by saying he’s got a lot of life left in him.

Watch the video below to truly get a feel for what this encounter was really like.