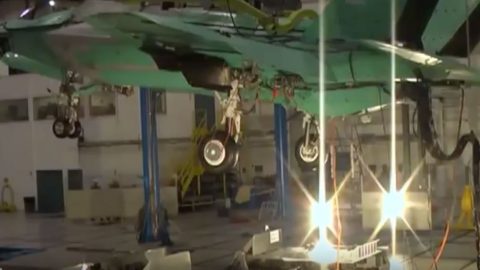 In the year 2000, Lockheed Martin won the United States government’s Joint Strike Fighter program. They were tasked with developing a 5th generation stealth fighter aimed at being able to be used by multiple branches of the military, namely, the Air Force, Navy and Marine Corps.

Although the development of the aircraft has been turbulent due to design faults which led to cost overruns, Lockheed has been able to churn out three variants of the F-35 Lightning II, one of which was the “C” variant for the United States Navy.

The designation of Lockheed’s aircraft design for the Navy is the F-35C. It features larger and foldable wings (for carrier storage), a stronger tailhook and of course different software. The most crucial hardware test, however, was the landing gear.

One of the tests was aimed at testing the landing gear and how it’d handle the harder than usual landing associated with carriers. We managed to find footage of that and it looks like Lockheed reinforced the gears to handle just that. Compared to its Russian counterparts, the future of the United States Navy looks solid.