Why Is The American Flag Reversed On Military Uniforms? 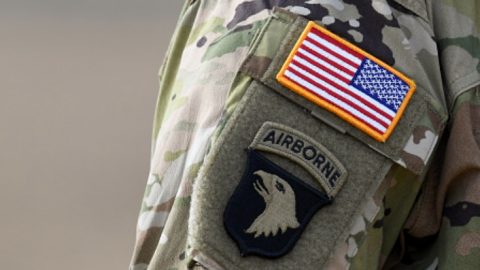 The field of battle is never a pleasant place for American soldiers, but one where they need to be in order to achieve peace. It seems unusual to some that the American flag would be displayed backward on military uniforms. However, this symbolism does have a significance and it is rooted in American history.

In years past, it was customary to have a flag bearer displaying the American flag on the field of battle. The flag bearer moves forward to boost morale among American troops.

A normal flag would symbolize retreat as it stands still, but the flag shifts direction in the wind as the flag bearer advances. This symbolism was updated to reflect troops advancing in battle and was updated in 2003 for army regulations.

“The full-color U.S. flag cloth replica is worn so that the star field faces forward and gives the effect of the flag flying in the breeze as the wearer moves forward.”

This practice is not meant to dishonor the flag, but to inspire those who wear it. Simple History provides a great look a the story behind the reverse flag in this video.