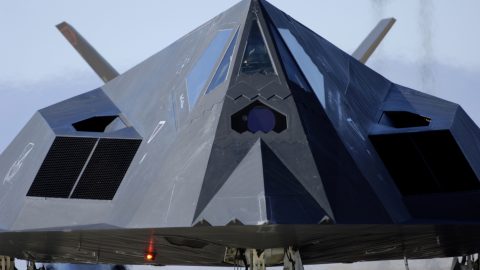 This is an editorial type piece because we seriously can’t believe this happened. One of the Instagram pages we follow, namely, combat_learjet, just posted a video of an F-117 flying in Death Valley, known as Rainbow Canyon (also nicknamed Star Wars Canyon.)

The description of the event by the uploader goes as follows:

In the video, you can clearly hear the cameraman say, “February 27th. F-117 stealth fighter over Death Valley.” Sure, that could have been dubbed but this video is circulating around the web like crazy.

We’re sure that most of you know this, but these birds have been retired in April of 2008. The F-22 Raptor replaced its stealth capabilities with added speed and maneuverability so the Nighthawks were mothballed.

There was a stipulation of maintaining that a certain amount of them be “in a condition that would allow recall of that aircraft to future service” in case the need arose, but since 2006 four aircraft per year were removed from that list. This leaves a few of them in flying condition to this day, but it’s the first time in a long, long while that anyone’s seen them actually flying.

Here’s your chance. The video is below.