What Causes Those Smoke Stacks Next To Nuclear Explosions? 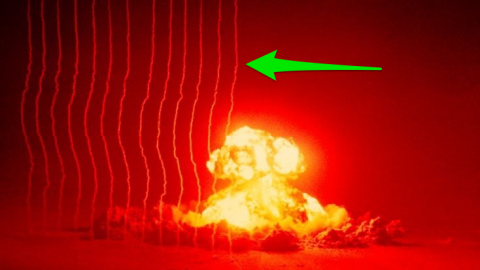 Those are smoke rockets, nonlethal and usually fired off prior to nuclear detonations to create vertical smoke trails. The smoke trails are actually there as a measurement system used before computers were readily available. The smoke would rise well above the mushroom cloud and researchers would study the movement of the trails in order to learn the effects of the shockwaves it produced.

They are fired at precise coordinates in order to correlate the data. Sometimes researchers fired off thousands of smoke rockets because most of them were expected to be destroyed by the blast.

A simple yet effective solution to measuring the effects of the bombs, but they appear more as a fireworks show. If you haven’t seen them in action, just watch this footage from a 15 kiloton blast and see how the smoke trails are affected.