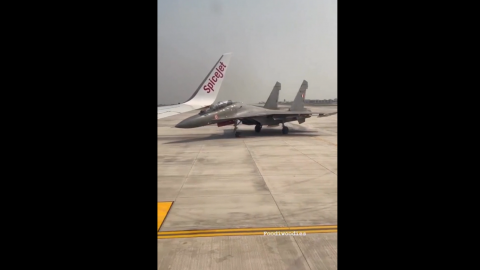 Have you ever looked outside the window of an airliner, hoping to catch a glimpse of a fighter plane?

For some, that’s just a wild dream. For others, especially those in Pune, India, it’s their reality.

This SpiceJet was innocently taxiing out of the runway when a Sukhoi Su-30MKI jet suddenly appeared from behind its tail.

Though not much is known about the Su-30, we can deduce that it probably was part of the Lohegaon AFS operating in Pune. India currently has more than 200 of these air superiority fighters in their arsenal.

People from Hawaii also have the same “problem.” Commercial flights in Hawaii share the tarmac with F-16s and F-15s from the US National Guard.