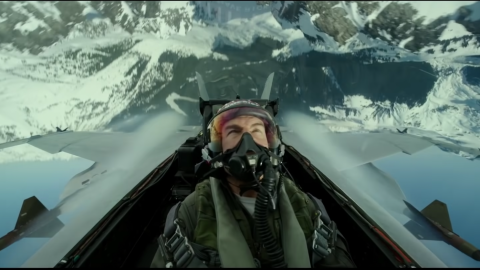 Kosinski wanted viewers to feel what it’s like to be a Top Gun pilot. This meant they couldn’t fake the g-forces, the vibrations, and most of all, the planes.

Cruise designed a three-month training course for the whole crew to go through. These exercises were done in order to familiarize the crew with the planes.

At first, the crew was slowly introduced to the inner workings of an aircraft. After that, they were made to experience controlled stalls and aerial sequences.

As Real As It Gets

The actors aren’t acting inside a booth. For the most part, they’re inside the planes as the actual pilot performs the maneuvers.

In one instance, Miles Teller’s seatbelt wasn’t tight enough. When the plane rolled, he bumped his head on the canopy – that shot was used in the movies. In another shot, the Darkstar’s low pass completely destroyed the set. That wasn’t the plan either but they knew they struck gold.